Ian Rowledge, Co-Founder & Director
In order to achieve complete production line optimization, it is not enough to simply measure downtime and collect metrics. In complex, high speed production lines, metrics have no value unless it is transformed into usable information— critically what has caused the true loss. The onus now rests on the manufacturing executives to constantly innovate and invest in solutions to optimize operations.

Ian Rowledge, Co-founder & Director of LineView Solutions, whilst working as a Production Manager at Coca-Cola Enterprises (CCE), realized that the primary challenge preventing optimized output on manufacturing lines was the inability to identify true casual losses. “CCE, like many manufacturing businesses needed a solution that would allow them to identify real losses affecting the whole line and not just downtime on individual machines,” he points out. Eventually, Rowledge left CCE and forged a strategic alliance called the “i3 partnership” with Bytronic, a specialist in factory automation and machine vision systems, and OptimumFX—an operational consultancy—and laid the foundation of LineView Solutions. Specializing in cutting edge real-time monitoring solutions to improve Overall Equipment Effectiveness (OEE), the company is just launching the latest version of their flagship product LineView, a production efficiency improvement tool. “LineView’s advanced logic accurately categorizes data and delivers meaningful intelligence, which unveils the reason behind productivity losses,” remarks Rowledge.

Fully automated for maximum accuracy, LineView is easy-to-use and configuring it requires no prior programming skill. The solution provides an overview of the entire line and performs 6-loss analysis on bottlenecks. LineView issues alerts on urgent problems like machine stoppages and unveils principle causes of downtime through actionable insights. The company also helps clients review and reorganize management routines based on the critical information revealed for maximized performance.

The implementation of LineView enabled CCE to increase capacity from existing equipment and defer capital expenditure. “Initially, CCE had a manual system to gather performance loss on their high speed bottling lines which made it difficult to analyze real-time impact of machine stoppages,” says Rowledge.

After LineView was installed, CCE performance reviews were made in real-time and overall site performance on some sites improved by greater than ten percent. The client also witnessed a more aligned workforce, increased productivity, and higher volume output.

While LineView helps visualize each production line, the firm also offers MachineView to monitor multiple independent machines and FactoryView for complete visibility of the plant floor. MachineView is a scalable and modular system that collects real-time data from varied machine groups and provides Key Performance Indicators (KPIs) to drive effective decision making. On the other hand, FactoryView captures automated data to provide an overview of the entire factory. Currently, the company is working on a new cloud based product called EnterpriseView, which takes FactoryView a notch further, allowing users to attain a report of multiple factories.

Moving forward, LineView Solutions is contemplating the inclusion of gamification into their software to increase engagement with their customers’ user base. “We also have a methodology called Line Balance Optimization or the process of optimizing line performance through the effective use of automation which we plan to build into our software,” reveals Rowledge. In addition, the company is developing RapidView, a battery operated system, using wireless technology which can be installed within a few hours. “Capitalizing on our 15 years of expertise, we will continue to deliver competent solutions, not forgoing our IFA formulae, where ‘I’ stands for Information, ‘F’ spells Focus, and ‘A’ means Action for effective results,” ends Rowledge. 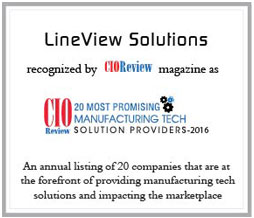