Ivan Nausley, Co-Founder & Director of Product Engineering
Today, the auto manufacturing shop floors are a reminiscent of sci-fi movie sets; with eight feet tall bright yellow robotic arms huddling over prototypes and working their magic. Over hundreds of these Transformers-like bots are leveraged to complete the production cycles rapidly, and with maximum efficiency. However, the manufacturing shop floors often become a stage for an uphill battle for engineers during instances of delays in the over cycles. Standards such as Factory Information System and Prognostic Health Management also fall short in spotting the sources of problems in the production line. To fill this gap, Beet Analytics Technology has developed a platform, ENVISION, which retrieves information of each cycle from the devices and Programmable Logic Controller (PLC), with an accuracy of 10 milliseconds. “Huge amounts of data are processed and analyzed by ENVISION which deciphers all the puzzles of the production line,” says Ivan Nausley, Co-Founder and Director of Product Engineering, Beet Analytics.

The key aspect of ENVISION is its three unique features. First is its algorithm that guarantees a huge data collection from PLC—when the control system fails to recover any dataset based on .05 to .08 seconds of scan cycle. Next is ENVISION’s concept of ‘heartbeat methodology,’ which showcases action¬able information for assessment at the shop-floor level. Original Equipment Manufacturer (OEM) can underscore all the hotspots and correct them by priority—operator delay and device degradation can be caught in real-time. Another distinguished feature of ENVISION is its ability to process data without causing any network overload, hence eliminating the risks of unexpected downtimes. “ENVISION manages data storage and processing without impairing the PLC functions,” says Nausley. It also decreases the dependency on engineers to resolve complex production issues, bringing the digital world to shop-floor and transforming the traditional auto workshops into smart factories.

The Plymouth, MI based Beet Analytics has deep experience in manufacturing, coupled with resilient IT expertise.

With its platform, the company is filling the voids in the automotive space which were left untouched due to the lack of collaboration quotient and efficiency in workshops. “ENVISION generates granular details that can help OEMs take better decisions and devise improved strategies,” says Nausley. The brilliance of ENVISION lies in those seconds that it saves by preventing over cycles in the production line, which can result in the manufacturing of an extra 10,000 vehicles a year.

To shed more light on ENVISION’s impact, Nausley narrates an anecdote, where a customer’s expectations were exceeded with increased efficiency and profits. The client was struggling to achieve 80 percent efficiency on an assembly line with 100 stations and over 140 operators. Beet Analytics addressed the issue with ENVISION, which allowed visualization of 8,000 in which 7,000 of them are micro stoppages of less than three seconds. “After corrective actions were defined and implemented, within four months, the efficiency improved by 8 percent,” adds Nausley. “Today, the efficiency target has been set to 92.5 percent and an additional 40 engines are being built per day.”

In the coming years, the automotive industry can witness Beet Analytics rolling out more products along the lines of supporting auto manufacturing. To achieve this feat, the company is joining hands with various players from the auto vertical that share the dream of transcending the current grade of the industry. 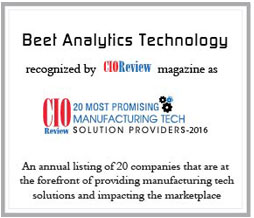