Aerospace Automation - The Robots are Coming!

Aerospace Automation - The Robots are Coming! 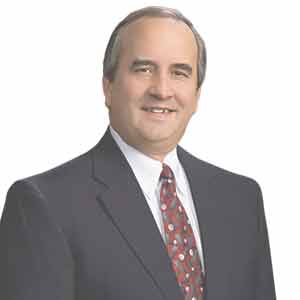 “The robots are coming,” is a common saying these days in industry as more and more automated robotic systems are making their way onto the factory floor. Aircraft manufacturing automation lagged the automobile industry for many years because aircraft production volumes are significantly lower. However, robotics are used today across both the commercial and military segments of the aerospace industry for their technology, reliability and affordability.

The future of robotics and automation in the aerospace industry is bright. However, there are no plans for fully automated, light-out manufacturing

At the Lockheed Martin facilities in Fort Worth, Texas, and Marietta, Georgia, robots are ensconced on the factory floor to produce the F-35 Lightning II fighter aircraft. In addition, robotic systems are being installed for new programs at the Skunk Works® in Palmdale, California, as well as integrated into long-established production lines like C-130J Super Hercules in Marietta.

The extensive implementation of robotics and automation on F-35 and future programs is enabled by the Digital Thread (DT). DT is the creation, use and consumption of 3D engineering models and data by downstream functions like manufacturing, supply chain and sustainment. The Digital Thread provides direct access to engineering data by partners and suppliers, greatly reduces the number of changes and supports automation. Mechanics and maintainers use the 3D data for graphics in work instructions and tech orders, optical projection of data onto the aircraft surface and augmented reality training and collaboration. Plus, DT allows direct comparisons of as-designed to as-built configurations using non-contact metrology technologies like structured light and laser scanning. 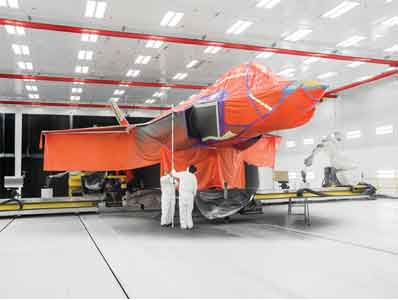 Automation on F-35 initially consisted of various gantry systems that drill 80% of the outer surface holes accessible to these large robots. Improvements in technology enabled new systems with more flexible robotic arms that can drill holes not accessible to gantry systems. In many cases, laser tracking metrology is used to help position robotic systems for improved accuracy.

We also use robots to apply aircraft coatings (Figure 1), taking advantage of the precision, quality and labor savings compared to manual applications. It is simply not possible to apply coatings manually and control the weight as well as the performance and cosmetic quality of the application. In another application (Figure 2), we use robots to locate tools on the aircraft and injected coatings between the tools and the aircraft surface. This process, called “mold in place,” was implemented with our existing robot booth to save money and improve process span time. In this case, we replaced the robotic sprayer with another robot to implement improved robotic technology. 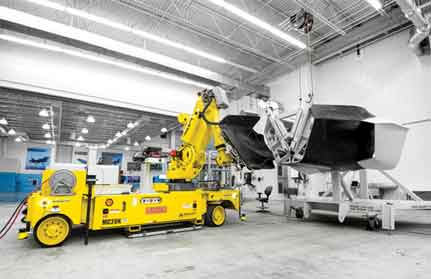 There are big changes ahead as we implement robotics and automation for aircraft inspections in production and sustainment operations. On many programs, it is critical to control aircraft surface features such as gaps, mismatches and fastener flushness. Instruments used to measure these features are laser based and are often tied directly to IT systems for automated reporting of any defects–a great example of the internet of things and the convergence of IT and operational technology. However, the great number of required measurements is time consuming. In the future, robots will scan aircraft surfaces to collect this data, significantly reducing time and improving ergonomics for our mechanics. Lockheed Martin and many other companies are experimenting with drone-based production and post flight inspections. Imagine climbing up 65 feet to the top of a C-5 Galaxy transport aircraft for an inspection. Drones eliminate the need for a platform and stairs for external inspections, reducing time and improving safety. We are also studying cobots (robots directed by mechanics), although this technology is still immature.

The future of robotics and automation in the aerospace industry is bright. However, there are no plans for fully automated, light-out manufacturing. We will continue to depend on highly trained, highly skilled men and women to perform critical operations and inspections–with the help of technology.

One Source of Truth for Our Frontend

Digitization Before and After a Global Pandemic